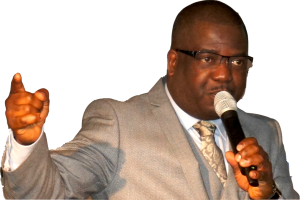 Born in Benin City – Nigeria, Pastor Charles grew up at the United Baptist Mission House where his maternal grandfather – the Rt. Rev. Dr. Samuel I. Usunalele, who began the family´s long history of Christianity and Church Administration was the Prelate of the Mission. Pastor Charles´ parents, Engr. E.O. Uwagboe – father, a Chemical Engineer and Deaconess Eva O. Uwagboe – mother, a Head Teacher (both retired) lived and studied in Munich, Germany in the 1960s before returning to Nigeria.  With a sound Christian upbringing, coupled with the reality of growing up in the Church House, Pastor Charles grew up together with his five sisters – Mrs Renate Umunadi, Engr. Mrs Esohe Olajimi, Mrs Irowa-Lilian Duyile, Mrs Osaro Bare and Mrs Efosa Araki.

Pastor Charles has been indeed a „Church Boy“ growing up and actively participating in Church Activities from the age of 9. At that age, he had started singing and playing musical instruments in the Church Choir, and became the Youth Leader at the age of 19. He was also in the Boys Scout Movement.

In July of 2001, he relocated to Europe. In that same year, he was nominated by the International Geosphere-Biosphere Programme (IGBP) Sweden, as a Research Fellow to deliver a paper on Sustainability at an International Conference – Challenges of a Changing Earth: Global Change Open Science Conference in Amsterdam, The Netherlands. He has attended many continuous learning courses with distinction in Europe.

CAREER
Charles I. Uwagboe is a Professional Food Scientist with multidisciplinary experience. He has had various professional experiences both in related and non related disciplines. He worked with the Agricultural Development Programme (ADP) in Benin City, Nigeria, Dell Computers in Limerick, Ireland, Audi AG and Unilever Holdings, both in Germany. Pastor Charles is a certified Project Manager and the Founder/CEO of FriedenEvents – an Event Management Company.

In his professional life, he has travelled across continents, from Africa, Asia, Europe, the Middle East and has been in charge of a global portfolio in Research and Development as a Global Material Expert at Unilever Holdings, Germany. He has developed some major quality processes for raw materials used in the Food Industry globally. His collective experiences from these different places and life´s situations have summed up to his broad spectrum of understanding and answers to many questions in life.

HIS CALLING
From the age of 5, Pastor Charles through the support of his praying mother, has been loving God, fearing Him and doing His will. He has had numerous encounters with the Lord Jesus Christ accompanied with Miracles. He is a living testimony through the Power of the Holy Spirit, and his life has been a great source of inspiration and encouragement to many people. He is a Man of Faith and anywhere he goes, he preaches and teaches explicitly the Power of Faith in Christ. He has served in the office of a Minister of the Gospel for many years and attended the School of Disciples and the Christian Leaders Institute based in the USA.

CONSECRATION AND ORDINATION
Pastor Charles was first consecrated along with his wife Ekema in Karlsruhe, Germany by Apostle T. D. Joseph, and a few months later, he was ordained into the office of a Pastor by Bishop A. Kesse in Esslingen, Germany, where he worked with Rev. Ejisaye in a close cooperation for the Gospel of Christ. Those ceremonies were to confirm the mandate that had been given to Pastor Charles from Heaven to go into all the world and preach the Gospel and win souls for the Kingdom of God.

PILGRIMAGE
Pastor Charles is a Jerusalem Pilgrim (JPm). He has visited the Holy Land of Israel on two occasions. In 2016, he made a glorious pilgrimage to Israel where he visited the most Holy Places on earth. He was in Bethlehem at the Church of the Nativity where Jesus Christ was born in a Manger. He was in Jerusalem where he prayed at the Church of the Holy Sepulchre and dedicated his newly written Books (My Prayer Tank and The Kingdom Passport) at the site of Crucifixion and tomb where Christ resurrected. He was also at the Sea of Galilee, at River Jordan and visited most of the Holy Mountains amongst other places in the Holy Land of Israel. He was specially honoured with a „Jerusalem Kippah“ by the Rabbi of the Jewish Synagogue when he visited the Temple Mount in Jerusalem. On his second visit to Israel in August 2018, he was in the company of his wife and children, and they made an exciting tour of Israel with visits to major historical and significant Holy Places where Jesus also was. A very noteworthy event during his second visit to the Holy Land was performing his first baptism of some 10 new converts at the River Jordan in Tiberias, Israel.

FAMILY
Charles Ikponmwosa Uwagboe JPm is married to Ekema Uwagboe an IT Business Consultant, and they are blessed with 4 children.
Together with his family, they have a Chapel (The Faith Chapel) in their personal house where they organise their Family Fellowship in Heilbronn, Germany. Pastor Charles has a dual nationality – He is both Nigerian and German Citizen. Among his hobbies, he loves cooking, which is a special attribute from his Maternal Grandmother, Deaconess Esther Usunalele of blessed memory.